The Importance of Wind and Fog

Think of Petaluma Gap as a giant wind tunnel, fed by cool maritime breezes off the Pacific Ocean at Tomales Bay. Officially established as the 17th sub-AVA of Sonoma in 2017, more than two-dozen wineries are part of the “Wind to Wine” alliance that promotes this windy fog-driven region that straddles northern Marin and southern Sonoma counties.

“The Gap” encompasses 200,000 acres, stretching from Bodega Bay, southeast to Highway 37 at Sears Point on San Pablo Bay, then to the base of Sonoma Mountain on the north side. Here, 4,000 acres are planted to vines: 75% are pinot noir, 13% chardonnay and syrah, 12%. The wines are defined by wind: perky, acid-driven whites, athletic dancer pinot noirs and muscular syrahs. There are scattered plantings of albarino, riesling and viognier, too.

Kimberly Pfendler of Pfendler Vineyards says her late husband Peter, who passed away in 2007, began planting vines in 1992. “Some of his early plantings were the first grown in the windiest portion of Petaluma’s ‘Wind Gap,’ including the site now known as Gap’s Crown. The region is like a wind tunnel, with the gaps in the coastal hillsides funneling in cool Pacific breezes and ocean fog from the Pacific through the city of Petaluma and then south to San Pablo Bay.”

Although many were involved in establishing the AVA, Pfendler particular credits board president and vintner, Rickey Trombetta Stancliff, vintner Ana Keller, and grower Doug Cover, for being instrumental in making it happen.

Ana Keller, Estate Director of Keller Estate, says her family has been farming in Petaluma Gap for 30 years, and has 90 acres of vines. “When we first planted in 1989, we were advised by UC Davis that chardonnay would work, but pinot noir might not ripen, because it’s too cold. We were surprised at how ripe the chard got! Rombauer was looking for grapes and we sold to them until their own vineyards came online. We were the acid in their wine!  We planted pinot noir in 1994, on an east/west orientation, like in Burgundy. In 2018, we replanted with a NW/SE orientation.”
She says that like clockwork, the wind comes up every day at 2pm, from March through October. “This means less mildew pressure and less frost.”

Hilary Cline of GUST sources from two distinct sides of The Gap, which she considers “the most exciting new AVA in California.” She explains, “Diamond Pile is on the valley floor, and while that typically means a site will be warmer, in the Gap this is actually our cooler site, as the fog settles in and lingers, and it is more exposed to afternoon winds.” Skins thicken, and blocks here are last to ripen, amping up tannin and savory elements. “Catapult Vineyard sits at higher elevation, so it’s more protected from the wind, and contributes more of the high toned red fruits in our pinots and the lush fruit character in our chardonnay.”

Legendary Sangiacomo Roberts Road Vineyard comprises 130 acres at the base of Sonoma Mountain, at the far northern edge of the Petaluma Gap, where the fog settles first and leaves last. Says Steve Sangiacomo, “It sees more wind, fog and coolness than any of our other chardonnay vineyards. This, leads to slower ripening, smaller berries and more intensity in the fruit.”

Joe Nielsen of Ram’s Gate works with Roberts Road Vineyard and Gap’s Crown Vineyard, among others, noting the conditions are similar to his estate vineyard on the San Pablo Bay. “We embrace the Petaluma Gap’s maritime influences,” he says.“ The fruit from Gap’s Crown is extremely flavorful and dynamic, without high levels of alcohol.”

Garry Brooks of Brooks Note (est. 2012), makes wines from three different areas of the Gap. Azaya Ranch, on the far west side, lies in Marin County, and is one of the region’s coldest sites. “We usually pick Azaya a full month after most of our other pinot vineyards.  It makes elegant, floral wines with great length and a lovely herbal finish.”
The Brooks Note Petaluma Gap pinot noir comes from Paradise Vineyard, across from Sonoma Raceway, and Panther Ridge Vineyard, on Sonoma Mountain, east of Penngrove. “The vines at Paradise get blasted by wind from both San Pablo Bay and the Petaluma Gap,” says Brooks. “It’s a cold, beautiful, inhospitable site for growing grapes, which makes amazing wines.” Panther Ridge has volcanic soil, with pumice and basalt, and delivers dark character.

Asked which varietal best showcases this unique climate, Ana Keller says chardonnay. “The acid and the minerality make it 100% unique, and very spicy. We get a lot of tamarind in barrel-fermented chards.”

Joe Nielsen of Ram’s Gate votes for pinot noir, admitting he has far more experience with it than chardonnay from The Gap. “Pinot noir grapes are often extremely concentrated and fully develop over a longer period of time, creating extremely well-balanced fruit.”

Hilary Cline of Gust gives the nod to syrah: “It’s the unsung hero, expressing a complex mix of bright florals and peppery, strong tannins.”
Gary Brooks says, “I drink a lot more pinot than chardonnay, so my answer is biased, but I think it’s definitely pinot noir.  Higher wind speeds in the gap cause a little thicker skins on the grapes.  Because pinot noir is fermented on the skins, I think we see more impact in the finished wines.”

Steve Sangiacomo told us, “Both Burgundy varieties are so transparent in their terroir, however pinot noir expresses the trademark Petaluma Gap lushness the region has become known for. The pinot noir grapes in this AVA need a longer time to ripen, allowing them to develop deep, rich flavors with layered complexity.”

Russell Bevan of ADDAX, who has sourced from Petaluma Gap vineyards (Pfendler, Sunchase, Five Wells) since 2013, had this observation: “To date, pinot noir has been the pivotal varietal in the Petaluma Gap. Moving forward, I believe chardonnay has a special home in the AVA. They have an incredible freshness and density that make them very unique.” 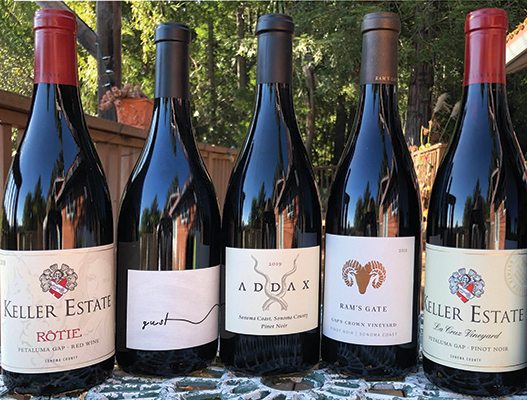 Ram’s Gate 2018 Gap’s Crown Pinot Noir – A superb example of cool climate Petaluma Gap, with its breeze-driven floral and cedar notes, and its tangy cran-raspberry core, that evanasces on your tongue. Engaging to the max.