When winemaker Jesse Fox, fresh from Amici Cellars and prior to that, Ram’s Gate and Harlan Estates, walked through the doors of the 116-year-old barn at Sequoia Grove in February of 2022, he wasn’t sure what to expect. But seeing the brilliant stained glass window in the winery’s beautiful redwood tank room must have filled him with a sense of awe. Taking over the helm at this longtime Rutherford institution, known for accessible Napa Valley Chardonnays and Cabernets that have been on wine lists everywhere since the late 1980s, was certainly an honor. It was also a chance to continuing the legacy begun in 1978 by wine pioneers James and Barbara Allen, who registered bonded winery #500 in 1980.

Quickly, he realized that like the majestic redwoods that form a fairy circle in front of the tasting room, the material he had to work with was rock solid. With 86 acres of estate vineyards, including the newly acquired State Lane Vineyard in Yountville, plus access to Tonella, Stagecoach, Morisoli and Lamoreaux, the Pennsylvania native had a fully stocked kitchen and some time-tested recipes to guide the blending of his first wines that are now in the marketplace.

The 2021 Chardonnay, with tropical fruit, sage, tangerine and lemon with flavors of apple bread pudding, makes a fine introduction, followed by the 2019 Napa Cabernet, with 60% Rutherford fruit, displaying elegant tannins and intense baker’s chocolate with a hint of rosemary. A barrel sample from the 2021 vintage he is currently working on showed splendid richness, cherry tobacco, brownies and cinnamon coffee cake.

The challenging yet thankfully smoke-free recent harvest of 2022 was his first opportunity at calling all the shots necessary to put his inaugural vintage on a good trajectory. He’s already putting his own stamp on Sequoia Grove winemaking: he’ll add a bit more new oak, and rack every four months so he doesn’t have to filter at bottling time. “We had a beautiful growing season right up to the heat wave,” says Fox.  “I don’t like raisins!” He was adamant about capturing the essence of fruit to create wines that express “an unexpected sense of engagement.”
Vineyard Director Jake Terrell is working on replanting the State Lane Vineyard, carefully choosing the right rootstock and plant material. “We’re not growing broccoli!” Jesse says. “We have to grow the best grapes possible.”

Planting perennial and annual cover crops, and using compost and biochar, will help elevate grape quality and will bolster Sequoia Grove’s commitment to sustainability. They are proud to be a Certified Napa Green Winery and supporters of the Save The Redwoods League, whose mission is to preserve the habitat for old- and new-growth redwoods and giant sequoias.
Perhaps there’s a bit of delicious irony in the fact that Fox initially pursued a career as a chef, after receiving a degree in hospitality at Cornell University, attending Le Cordon Bleu in Paris and then working under Thomas Keller at The French Laundry.  Now, just a few miles away from the magnet that drew him to Napa, he’s making the wines that Sequoia Grove’s incredibly talented onsite chef, Britny Maureze, is pairing flawlessly with her own culinary creations.

“Everyone thinks that Cabernet pairs only with beef,” Maureze notes. “Sure, it’s a fantastic match for beef’s richness and fat, but it’s my goal to show you how versatile it can be with a range of foods.”

Tasting her innovative pairing of crispy skinned black cod over caramelized parsnip puree, Beluga lentils and fennel and apple relish, served with the earthy 2016 Tonella Vineyard Cabernet Sauvignon, was truly mind blowing. Another brilliant combination was duck confit with mole rojo and pickled vegetables that set off the 2017 Christian Vineyard Cabernet like chimes. By the time we got to the captivating 2015 Cambium, the winery’s flagship Cabernet blend, it was time for Maureze to dazzle with Denver steak and a voluptuous Bernaise sauce, accompanied by decadent pommes frites.

Truly, Sequoia Grove is the perfect place to experience the warmly approachable hospitality that Napa should be known for. 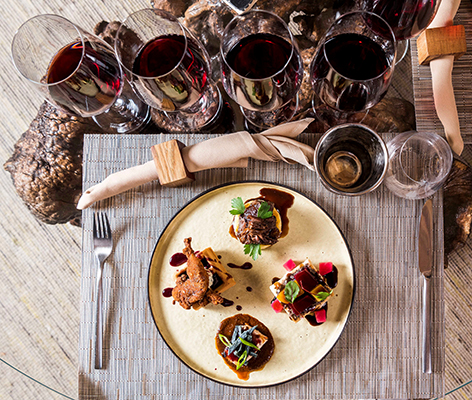 Sequoia Grove has dedicated hosts who will guide you through a range of experiences. Be sure to stand in the ring of giant redwoods!

Winemaker Series – A tasting of four wines in the historic barn or on private patios, weather permitting. Optionally, upgrade the tasting with a paired selection of fine cheeses and charcuterie curated by Winery Chef Britny Maureze. $45 per person

The Ultimate Wine & Food Experience: A Taste For Cabernet – Forget all the “rules” you were taught about pairing food with wine and be guided on a wine and food odyssey that takes place in the beautiful Cambium room. Savor Single-Vineyard and Reserve wines with unconventional food pairings orchestrated by Winery Chef Britny Maureze. By advance reservation.
$140 per person; Club Members: $100 per person